Often, especially in the winter, the only painting I do is at the life sessions at a club in Toronto. These are two paintings done almost a year apart that step back a bit and take in the group and the room as well as the model.

This was done last January.

This was last Monday. 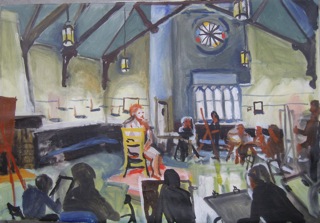 It was the same model by chance. What I am pleased with is the different kinds and colors of light in each painting. There’s the cool bluish light from the windows and the warm incandescent spotlight on the model with a bit of a mixture of the two on the artists in the background.

That makes the ambiance of the room feel the same on both days and achieves one of the most important things I try to do in all my paintings which is capture a quality of light.

Light, of course, can’t be seen and only reveals it’s particular temperature and intensity when it is reflected off an object. Having two light temperatures is quite common in contemporary interior spaces where windows are letting in daylight and bulbs supplementing the light in the room. The contrast is perhaps more noticeable in a large space and especially in a situation like a life drawing session where spotlights are trained on a model.

The paintings invoke issues of spectacle and spectator with the quality of the light and stillness of the model contrasting with the activity of the artists. The second painting is almost divided exactly in half by the vertical of the wall of the alcove. The artists on both sides lean in toward the model, an attitude echoed by the beams in the ceiling.  The light illuminating the paintings on the walls is the same type as the light on the model making an association between the finished paintings on the walls and the subject in the center of the room. The artists share a “light theme” with the window light and that relates their activity and quality of concentration to the natural light of the outside world.

hi rskoggard.artspan.com owner found your blog via yahoo but it was hard to find and I see you could have more visitors because there are not so many comments yet. I have found site which offer to dramatically increase traffic to your blog http://xrumerservice.org they claim they managed to get close to 1000 visitors/day using their services you could also get lot more targeted traffic from search engines as you have now. I used their services and got significantly more visitors to my website. Hope this helps :) They offer homepage service 1 seo backlink service high pr backlinks Take care. steve