To Paint or Not to Paint Water, That is the Question. 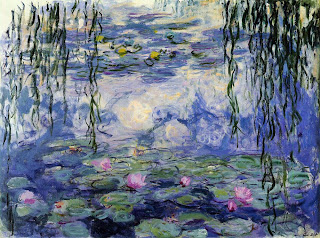 Water is the best subject for exploring purely optical effects with paint.

Because it is always seen in natural light and it modifies and elucidates that light like nothing else, water is a subject closely associated with Impressionism. (Even atmospheric effects are caused by the water in the air.)

Yet water disappears as a subject after the post-impressionists.  After his Fauve period (which was really just his attempt to define the limits of the Impressionist program) Henri Matisse never memorably painted the optical effects of light on water.  Water as a prism for light effects was never a subject for Pablo Picasso either.

To paint water or not to paint water, that is the question.  The answer defines the boundary between optical painters like the Impressionists and analytic painters like the Cubists.  By accepting or rejecting the challenge of painting water, artists of these two schools declare separate esthetic priorities and different agendas for the means of painting.

In the form of a river, a pond, a lake or ocean, water presents unique challenges and opportunities for a painter because it is partially transparent, semi-reflective and constantly in motion.  It is the subject by which a quality of sunlight is apprehended in its purest, abstract form with minimum metaphorical content.

As such, the challenge of painting water has demanded almost the whole repertoire of Impressionist techniques. Indeed, you could say that Impressionism was developed as much to account for the light-scattering and diffusing properties of water as any other subject.

The Water Lilies, Monet’s last great thesis on the nature of painting, posits that abstract rhythmic color on a surface can be a valid visual signifier for a body of water.  The Water Lilies declare that the essence of painting is optical. (“. . .Only an eye, but what an eye!” said Cezanne of Monet. But even so--only an eye).

Outdoor light is fugitive. It constantly changes color and direction. We see it only when it bounces off something else and strikes the eye. The subject that epitomizes or mimics that fugitive quality best is water. 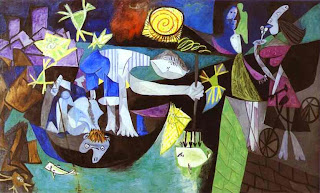 It is questionable whether Picasso who typically painted indoors and at night ever saw water as anything more than an opportunity to cover the lower half of the composition with a rectangle of serene blue. 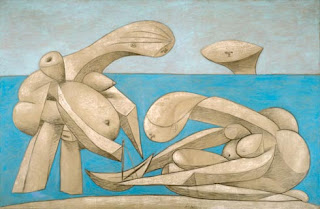 At the Beach, Pablo Picasso

The beach and the sea for him are just a theatrical backdrop and are painted that way.

Matisse reduced water to some luxe fashion pattern like you'd see on a Hermes scarf.

So in a generation a central preoccupation of an entire national school of painting is discarded, never to be seen again.  Why did the subject of water suddenly become obsolete? Is it because the School of Paris didn’t want to, didn’t need to, or simply because they couldn’t paint the optical effects of light on water with the painting vocabulary they had established?

I bought a set of bumper stickers in Siena, Italy about 20 years ago that represent the colors and some design elements of the banners of the 17 different contrade or city wards.

The designs are simultaneously authentic mediaevil and modern/minimalist. They have the flat, programmatic presence of a Bridget Riley painting but they derive from battle banners: graphic signs to identify the bearer as friend or foe.

I’m intrigued with how they succeed as minimalist painting compositions conveying a sense of urgency with their repeated, high-contrast motifs. These pictures aren’t whispering, they’re shouting. Their formal attributes organized primarily to turn up the volume and emphasize their difference from one another.

Bianco listato di Rosso of the “giraffe” contrada where the painters lived.

I bought them because I used to be a minimalist painter and I learned how difficult it is to compose an image that is free of  literary or illusionistic content.

And I feel these compositions do that while at the same time relying on a highly specific iconography. I just love them. They are emotional and flamboyant yet completely abstract.